Crafty Thinking: the power of handmade

I've been thinking recently about the power of "crafting".  Ever since the industrial revolution, the world has moved towards a mass-manufacturing model, taking the skill out of many careers and causing heavy dependence from workers on corporations.  Individuals around the world are stuck within the conveyor belt system, often not even aware of what is really being built, or for what purpose.
There is something incredibly powerful about creating something by hand.  Although most often the person who knits does not house the sheep it comes from, or the person who sews did not invent the sewing machine- the management of the entire project using one's own hands fosters skill, independence and personal investment in the item. 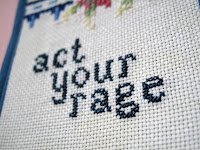 While crafting has been dismissed by capitalism as a hobby not gaining capital, I see handmade as being a revolutionary tool.  Making things by hand not only creates incredible variety and diversity, but it fosters community exchange and cultural appreciation and knowledge sharing.  On master crafting site www.etsy.com sellers often talk about their process and mission behind their goods, describing the process and often even sharing the blueprints for others to make their own item along with their goods in their virtual store. (see radicalrags.etsy.com for examples like the image above) Teams on Etsy cultivate the community experience along with how-to workshops and forums and in-person meet ups. Crafters here work as a collective together sharing the etsy forum and most of them work off the grid, earning independently from each sale with a small portion going towards the maintenance of the site.  Teams work together to give and gain exposure to like-minded artists without an exchange of money but added support on all ends.  Crafting communities I believe are at the forefront of a new type of production that is both founded in the feminine and requires community.  Keep your eyes open on etsy, I think I just convinced myself to create a  feminist etsy team. ;)

What's complicated about the independent versus the mass, is that for people who do  not have enough start up access or capital in order to create a career out of skilled crafts, most rely on large corporate production.  This creates a dependency on multi-national industry and takes agency away from both the worker (who has no access to goods or training) and the buyer (who depends on affordable and easier to access goods to sustain themselves).  Marginalized immigrants are only able to semi-escape the mass-made industry through selling to fetishism for the "native".  These handi-crafts are often important icons of personal heritage and culture and are sold to tourists or those looking for "authentic ethnic" gear.  This too puts those in a strangle-hold out of selling one's culture (or the buyer's perception of the culture). 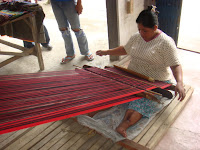 With this in mind I've become weary of buying items from sidewalk vendors who sell "ethnic" bags, jewelry or scarves but drawn to support their strive to sustain themselves.  (image to the left is taken by a tourist of Yakan) Everything that we own is cultural, it's just that White American cultures have become normalized and thus an "ethnic heritage" of Whiteness cannot be seen.  Cross stitching is as much as a good representing culture as African wax print fabric.  Each is representing cultural heritage and each is being sold as product, both as an item and as a symbol of authenticity and culture.  Whether we enjoy these products based on the quality and interest in the item or consuming representations of the exotic... what I have come to recognize is that cutting out "ethnic" products from my diet cuts EVERY-SINGLE-THING out and that there is no clear border between fetishized consumption and honest enjoyment/need of goods.
Posted by Chy at 5:18 PM

Chy
Berkeley, CA, United States
I've completed my Masters in 2009 from SFSU's Women and Gender Studies Department, looking to how boundaries of identity are being ruptured and reinforced by intersexed web community users. I've created a youtube channel where I speak about my project and interact with all of those whom my project focused on. (see "my webpage" link to the left). I am also working with the most phenomenal company I have ever encountered. Cafe Gratitude is a school of transformation disguised as a group of restaurants. I support and oversee the administration/offices and actively create and co-create a safe, powerful and transformational core to Cafe Gratitude.